See the link for the list of entries in this years Giltinan Championship.

The Thurlow Fisher Lawyers 18ft Skiff team of Michael Coxon, Trent Barnabas and David O’Connor gave a wonderful exhibition on Sydney Harbour today when they took out Race 4 of the N.S.W. Championship in an 18-25-knots South-East wind.

After trailing Gotta Love It 7 by just 3s at the first windward mark, Thurlow Fisher Lawyers grabbed the lead when Gotta Love It 7 capsized and from that point Thurlow’s crew were brilliant as they led clearly for the rest of the course.

The battle behind the winner saw many positional changes throughout the race before Smeg (Nick Press, Dan Phillips, Dave Ewings) finally came home 1m25s back in second place.

James Dorron and his Mojo Wine team showed their skill by finishing fourth after gear failure which prevented their use of a spinnaker on two of the latter runs.

John Winning’s Yandoo was fifth, to give the team the series lead on 16 points.

Thurlow Fisher and De’Longhi-Rabbitohs (Simon Nearn) won the start and were leading the group on the LHS of the course near Steele Point.

Gotta Love It 7 and Smeg elected to go to the right and sailed to the western side of Shark Island.

The two groups converged only 50 metres from the Rose Bay windward mark and there was little difference between them as Gotta Love It 7 led Thurlow Fisher Lawyers by the mere 3s.

Shortly after rounding the mark, Gotta Love It 7 capsized and the resulting damage has caused serious damage to the hull, which could have a drastic affect on the team’s chances of defending their Giltinan title next week.

The conditions were took a heavy toll on the race as six teams failed to complete the course, while four others did not make it to the start.

Don’t forget ‘Pick the Podium’ with prizes to be won by just making some selections on which teams you think will fill the placings in each race. For full details go to http://www.18footerstv.com/18-promo

Next week we have the biggest 18ft Skiff event on the world calendar when the Australian 18 Footers League will conduct the Winning Group J.J. Giltinan 18ft Skiff Championship for 2013.

The spectator ferry will depart Double Bay Public Wharf 30 minutes before the scheduled start time of each race.

Coopers-Rag & Famish Hotel took out Race 5 of the Australian 18ft Skiff Championship on Sydney Harbour today, but the runner up Gotta Love It 7 became the 2012-2013 National champion in the series. 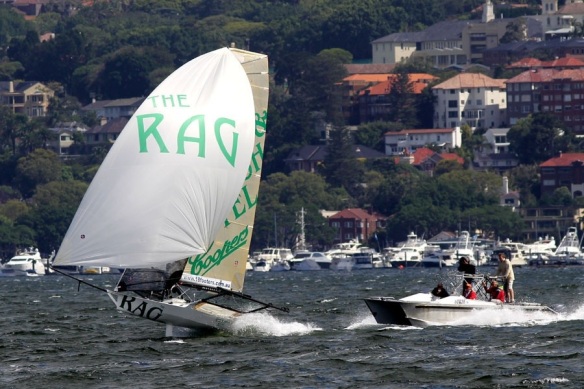 The Coopers-Rag & Famish Hotel crew of Jack Macartney, David Witt and Mark Kennedy were superb with their #2 rig in the 20-knot SW-SSW winds to take out the race by 1m14s.

After an early race incident which cost the team many positions, Seve Jarvin, Scott Babbage and Peter Harris recovered strongly to bring Gotta Love It 7 home in second place behind Coopers-Rag & Famish Hotel.

For the defending champion Thurlow Fisher Lawyers, and series leader going into today’s race, it was a disaster as the skiff finished 11th for an overall third place.

Appliancesonline.com.au (Micah Lane) finished fourth today and would have been fourth overall but withdrew from today’s race because of a pre-race incident, which was going to be the subject of protest.

Thurlow Fisher Lawyers was always near or in the lead over the first lap of the three-lap windward-leeward course.

Coopers-Rag & Famish Hotel was never far from Thurlow Fisher and the pair had a great battle over that first lap.

Coxon and his Thurlow Fisher team, along with Gotta Love It 7, elected to sail the Northern side of the course on the second windward beat and lost out to the Coopers-Rag team which were in mid harbour and better breeze.

This allowed Coopers-Rag & Famish to open up a clean break back at the Clarke Island windward mark and from that point the team were never headed.

Thurlow Fisher Lawyers was still in a good position to retain the title, but a capsize at the bottom mark on the second lap forced the team out of contention on the day and in the championship.

Spectator Ferry photos will also be published on www.18footers.com.au and www.flying18s.com during the coming week. 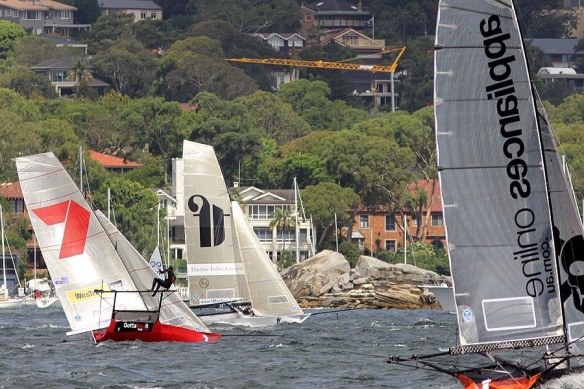 See the last race of the 18 foot skiff Australian Championships on 18footersTV.com

Good to race in plenty of breeze. The Kitchen Maker gets a few mentions and recorded 24.8 knots on the Velocitek SpeedPuck. Smeg passed us flying downwind and recorded even higher on their SpeedPuck.

Sailing in the Australian Historical 18 Foot Skiff Championships at The Sydney Flying Squadron. 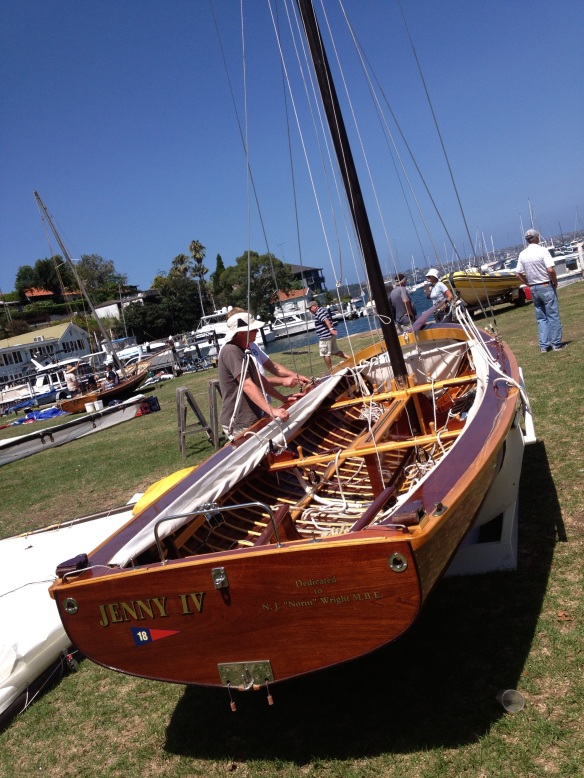 With North East winds in excess of 20-knots, today’s Race 3 of the Australian 18ft Skiff Championship became a battle of survival as only seven teams managed to complete the course on Sydney Harbour.

Defending champion and series leader, Thurlow Fisher Lawyers was a further 3m38s back in third place, ahead of Gotta Love It 7 (Seve Jarvin), Yandoo (John Winning) and De’Longhi-Rabbitohs (Simon Nearn).

Thurlow Fisher Lawyers (5 points, net3) holds a narrow lead over Gotta Love It 7 (8 points, net 4). Coopers-Rag & Famish Hotel has a total of 13 points, but her discard of 8 leaves a net 5 and a real chance for the title

Today’s winner, Smeg is also still a good chance with a net score of six points.

Smeg trailed Lumix (Jonathan Whitty) at the first windward mark but once she hit the lead downwind was never headed over the rest of the course.

Many competitors either failed to reach the start line or were forced to retire with gear failure.

Both Thurlow Fisher and Gotta Love It 7 had ‘swims’.

Brisbane’s Winning Appliances (Shane Smith) came to Sydney for the weekend and her crew showed their skills with a fifth over the line.

Press was happy with the win and said the biggest problem his team had was the spectator craft on the harbour for the Australia Day celebrations.

When as whether they had any capsizes, for’ard hand Dave Ewings quipped: “No way. It would have been too much like hard work to get up again if we did”

Race 4 of the championship will be sailed tomorrow, with the last race next Sunday.

Nice ride on the TKM 18 with Will Phillips and Darren McKavanaugh. Cracked 24.8 knots before the top spreader cracked off and we retired from the race. 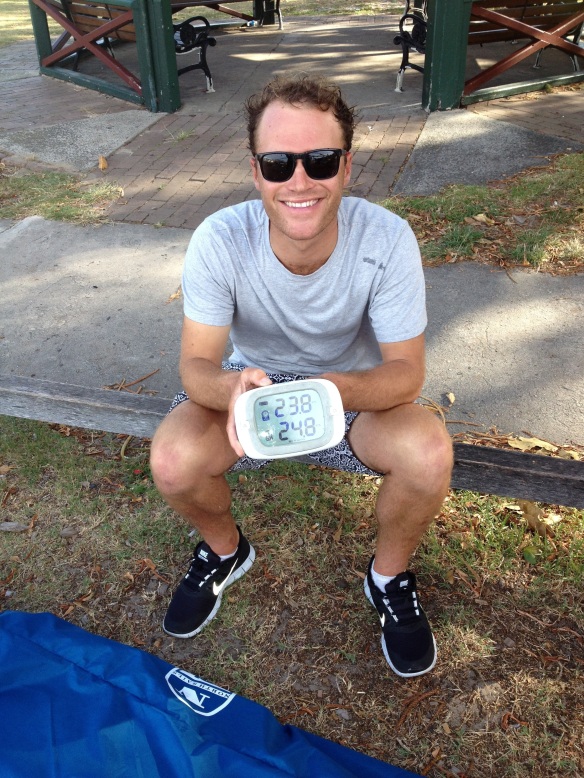 Thanks to Will for flying up from Geelong for the weekend and as usual, Darren, for asking the question. 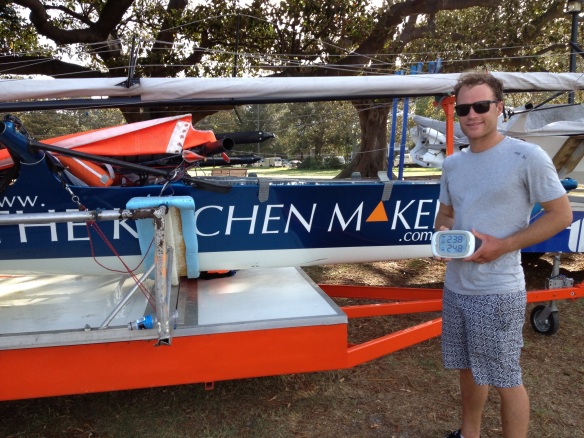 Spreader is back on the mast ready for another fast ride today. 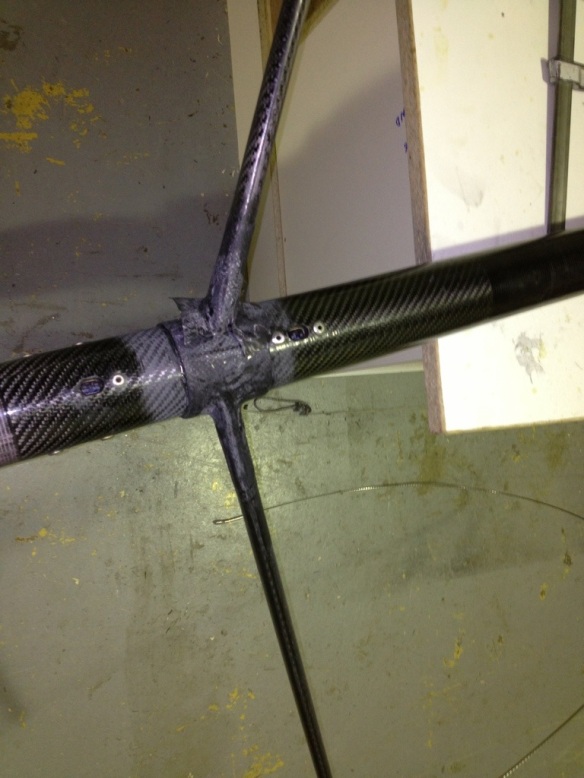