It was a great effort by the trio who were consistent, from the back mark, throughout the entire series.

With the best racing conditions this season, the fleet gave a magnificent spectacle for the ferry patrons in the 15-20 knot North-Easterly wind. 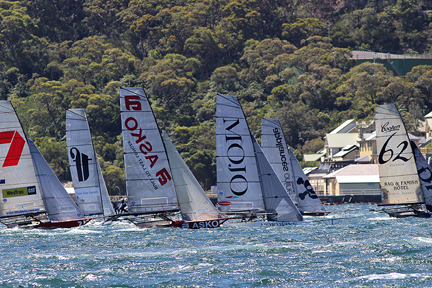 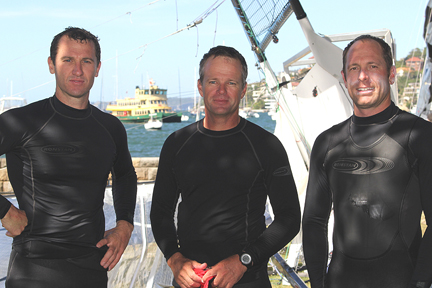 Conditions took a toll on the fleet with only 10 of the 18 starters completing the course.

The race to the first windward mark was close with only a few secs. separating the leading six teams.

The first spinnaker run was all action as Appliancesonline led the charge back to the bottom mark off Clarke Island with Gotta Love It 7, Thurlow Fisher Lawyers, Smeg, Fisher & Paykel, Coopers-Rag and Mojo Wine in hot pursuit.

Soon after turning for the second windward beat, the race took a dramatic turn as both Appliancesonline and Thurlow Fisher Lawyers were forced to retire with gear failures.

Gotta Love It 7 charged to the lead and it looked as though it may be all over for the challengers.

7 continued to hold a 25s margin over Smeg at the second set of windward marks with Sydney City Marine (David Witt) another 30s back in third place.  Coopers-Rag & Famish was also close behind in fourth place.

Another spectacular spinnaker run followed as Smeg began to pressure Gotta Love It 7.

A slight spinnaker mishap on 7 allowed Smeg to take a narrow lead for the first time.

With an advantage set to come at the final windward buoys, Smeg was in a particularly strong position to take the race honours.

An unexpected swim by the Smeg crew on the final windward leg allowed Gotta Love It 7 to regain the lead which the team held until the finish.

The red machine was driven hard by her crew down the final spinnaker run past the cheering crowd on the spectator ferry.

It was definitely the best race of the season and was a mouth watering glimpse into what we are likely to see during the championship end of the season.

More photos will be published on www.18footers.com.au.

Video coverage of the race can be seen on www.18footerstv.com.

The club’s regular spectator ferry will follow next Sunday’s Race 2 of the NSW Championship, leaving Double Bay Wharf at 2.15pm.

It will be the club’s final race before the break over Christmas and the New Year.

Racing will resume with Race 1 of the Australian Championship on Sunday 12 January.