An incident free race for the defending champion Gotta Love It 7 team proved a winning factor in a wonderful finish to Race 1 of the Winning Group 2013 JJ Giltinan 18ft Skiff Championship sailed on Sydney Harbour today.

Seve Jarvin, Scott Babbage and Peter Harris were always near the lead and managed to manouvre their way around the south-east course without the dramas of their three main challengers.

Smeg (Nick Press) won the start, while Thurlow Fisher, Mojo Wine and De’Longhi-Rabbitohs (Simon Nearn) were nearby on the eastern side of the course.

When Gotta Love It 7 tacked to go o the west, Thurlow Fisher covered and the two favourites went to the east of Shark Island.

The move was a winner as Thurlow Fisher Lawyers won the race to the windward mark to lead Coopers-Rag & Famish Hotel by 35s.

Thurlow Fisher Lawyers maintained her lead over the next two legs of the course and still held a 25s margin at the Clarke Island mark for the second spinnaker run into Chowder Bay.

Disaster struck the leader off Bradley Head when the wind disturbance off a passing Many Ferry caused a near capsize for Thurlow Fisher and gave Gotta Love It 7 the lead.

From that point ‘7’ was never headed but serious challengers by Coopers-Rag & Famish Hotel and Pure Blonde were hampered by separate incidents to those teams.

Skipper Jack Macartney fell overboard off ‘The Rag’ , while a port-and-starboard incident forced Pure Blonde to do a 360degree penalty turn at the final windward mark in Rose Bay.

Gotta Love It 7 certainly held a downwind speed advantage over ‘The Rag’ but was being pushed to the limit upwind.

A large ship leaving the harbour as the fleet made its way to the finish had a dramatic affect on many skiffs and changed the final placing throughout the fleet.

Despite a shifting wind which faded during the race, the spectacle was engrossing for spectators with so many close finishes.

A record was also set today when Alexandra South, Saskis Tidey and Lizzi Rountree became the first all girl crew in the 74 year history of the championship to complete the course.

The trio finished 28th in the 31-boat fleet in their Lomax Financial Group skiff.

Spectator ferries will follow each of the races in the championship, leaving Double Bay Wharf at 2.30pm, with the exception of Race 6 (Saturday 23 February), when the ferry will leave at 3.30pm.

Race 2 will be sailed tomorrow with further races on Tuesday, Wednesday, Thursday, Saturday and Sunday 24 February.

For those who can’t make it onto the spectator ferry, there are many ways to follow the championship:

For all official race results, race reports and photographs:
http://www.18footers.com.au 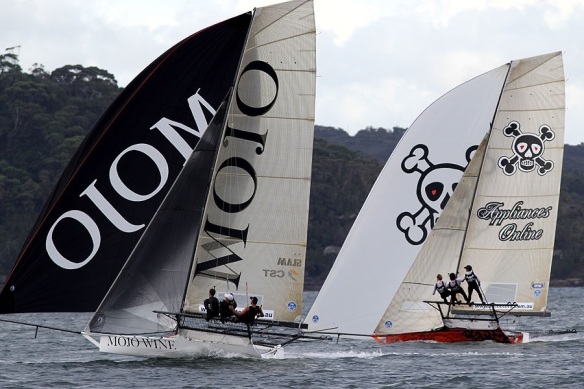 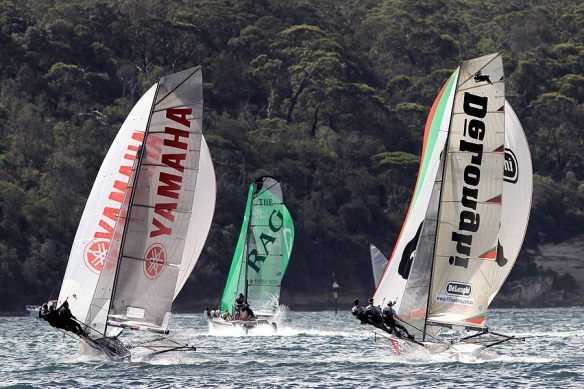 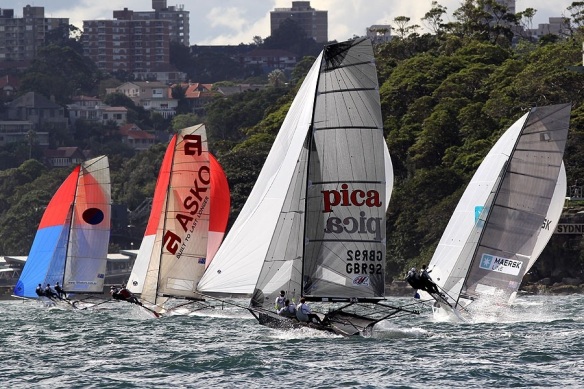